The Detroit Love event series is techno producer Carl Craig’s way of paying tribute to the city that inspires him.

“It’s a Detroit Love Affair, which is what I like to call it,” says Craig, who emerged from Detroit’s second wave of techno alongside Underground Resistance’s (Mad) Mike Banks, Jeff Mills and others. “It’s my love affair with Detroit.”

Detroit Love is a new concept from Craig that shines a light on those who shaped the city’s celebrated dance music heritage. Launched in October at Amsterdam Dance Event, Craig kicked off Detroit Love with a lineup including himself, Recloose, Moodymann and Banks. In a rare conjoined performance, Banks and Craig — two of the most important figures to arise from Detroit techno — pooled their talents, with Banks playing keys over Craig’s Moog-immersed four-CD deck set. 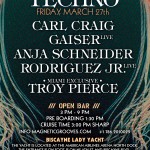